BEIJING -- Foreign journalists in China on Monday demanded that the government allow access to report on the events in Tibet where deadly anti-China protests have erupted over Beijing's rule of the region.

"The Foreign Correspondents Club of China urges the Chinese government to immediately allow correspondents into Tibetan areas for news coverage," the club said in a statement.

Two dozen reporters have been turned away from or forced to leave Tibetan areas since social unrest erupted last week, including from Lhasa, Tibet's regional capital, and Xiahe in Gansu province, it said.

Interfering in press coverage and denying foreign correspondents access to Tibet violated the spirit of regulations issued last year that gave overseas journalist the right to interview all consenting organizations and individuals without government approval, it said.

The temporary regulations were implemented only for the period up to and during the Beijing Olympics and have been cited as part of greater media freedoms in China ahead of the Games.

"Reporting interference is not in the interest of the Chinese government, which is trying to show a more open, transparent and accountable image to the world," club president Melinda Liu said.

China faced mounting global pressure over Tibet on Monday amid claims from Tibetan exiles that hundreds of people may have died in a crackdown on the protests, even though Beijing denied using deadly force.
Posted by Tenzin Yangdon at 10:10 AM

Freedom is not Free

“Whether the Chinese government admits it or not, there is a problem. The problem is a nation with ancient cultural heritage is actually facing serious dangers,” he said. “Whether intentionally or unintentionally, some kind of cultural genocide is taking place.” By His Holiness The Dalai Lama

If man will only realize that it is unmanly to obey laws that are unjust, no man's tyranny will enslave him. This is the key to self-rule or home-rule. By Mahatma Gandhi

It is better to be violent, if there is violence in our breasts than to put on the cloak of non-violence to cover impotence. Violence is any day preferable to impotence. There is hope for a violent man to become non-violent. There is no such hope for the impotent. By Mahatma Gandhi

Far better than cowardice would be meeting one's death fighting. By Mahatma Gandhi

"Negroes are human, not superhuman. Like all people, they have differing personalities, diverse financial interests and varied aspirations. There are Negroes who will never fight for freedom. There are Negroes who will seek profit for themselves alone from the struggle. There are even some Negores, who will cooperate with the oppressors. These facts should distress no one. Every minority and every people has its share of opportunists, profiteers, freeloaders and escapists. The hammer blows of discrimination, poverty and segregation must warp and corrupt some. No on can pretend that because a people may be oppressed, every individual member is virtuous and worthy. The real issue is whether in the great mass the dominant characteristics are decency, honor and courage." By Dr. Martin Luther King 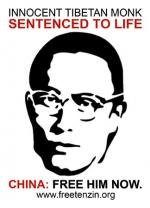 An Innocent man should not have to suffer in prison for the rest of his life.

Held incommunicado by Chinese government since the age of 6. China where is the Panchen Lama?

Picture of protest inside Tibet 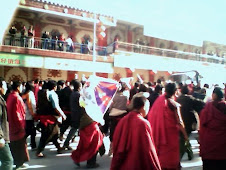